Why should I bring a California wage class action lawsuit? …. You can be David vs. Goliath Company, Inc.

When you take on the company by bringing a wage class action lawsuit and/or a PAGA case, you are helping not only yourself, but all of the other current and former workers at the company.

And, as I explain here - you may be entitled to A LOT of money in unpaid wages and/or penalties under California Labor Code, California Wage Orders and/or California's PAGA laws.

In this article, our California wage lawyers discuss this and the following questions and topics: 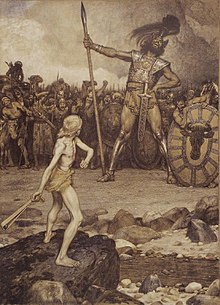 Have you heard the story about how David defeated Goliath? A boy with a slingshot defeats the biggest, toughest warrior.
The phrase "David and Goliath" has taken on a more popular meaning, denoting an underdog situation, a contest where a smaller, weaker opponent faces a much bigger, stronger adversary.
In this article, I explain how California's worker protection laws provide you the way to defeat the biggest companies in the world.
Maybe you have suffered damages from a large corporation or maybe your mid-sized company employer didn’t allow you to take breaks or you’re not being paid for all the time that you work and you want to stand up for your rights; however, your case may be too small and not worth the money and the time you would need to invest. It may surprise you to know that you may have a class action lawsuit.
A class action lawsuit benefits individuals who have small cases but can come together to make their voices heard in a large way. This type of lawsuit typically involves a few individuals coming forward to stand up for the rights of many people who are in the same situation. For example, you may be part of a wage and hour class action lawsuit.
Instead of filing many small individual claims, a class action lawsuit allows people to join with others who have been hurt in the same way to get a remedy that they otherwise might not have.

What makes it all worth it?  ... When you get your unpaid wages check!! 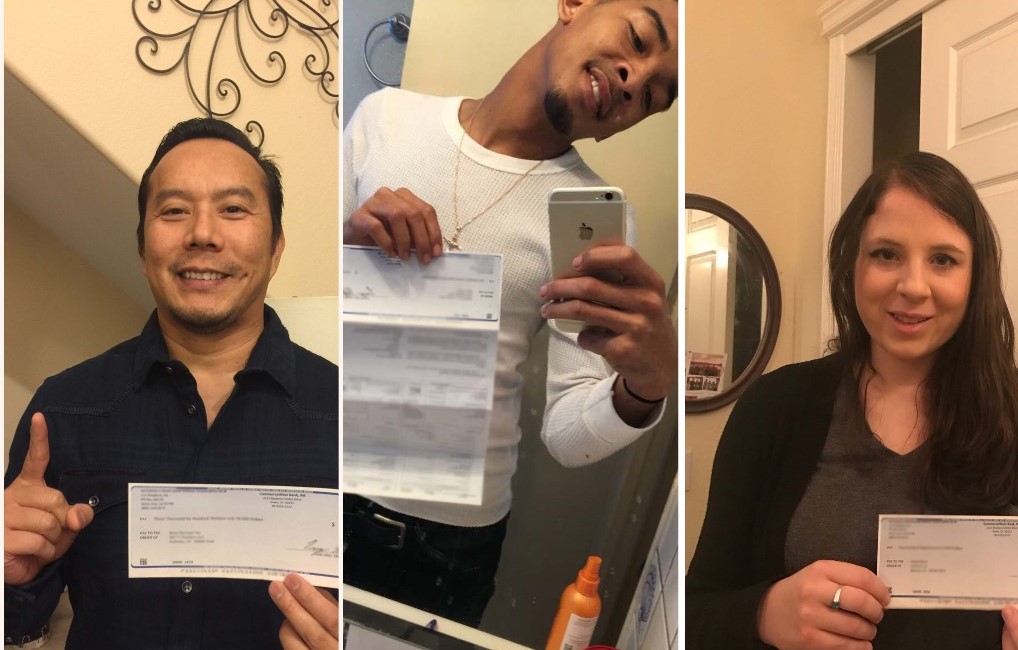 Getting your hard earned wages back

Why is Bill Turley asked to testify concerning

and the California Assembly?

Because he is known for being no B.S. straight-forward and tell it like it is!

What kind of wages can I recover in a California class action lawsuit?

It’s all about you getting your wages that you are owed. With paycheck stub violations, waiting time penalties and PAGA penalties - even if you are owed a relative “small” amount of wages -  - it can add up to thousands of dollars.

Why should you bring a wage class action lawsuit in California? Because the smile you will have when you get your wages back!!!

What wage violations can I recover for under California wage and hour laws?

While every case is different - here are your potential wages causes of action (read: the wage claims that you may be able to recover money for):

What can I do when I'm not paid on time?

What is an unpaid wages analysis?

How to claim my confidential, free, no obligation unpaid wages analysis.

How can I calculate the unpaid wages that I am owed?

What are my time limits for bringing an unpaid wages case (statutes of limitations for wage cases)?

Am I owed waiting time penalties?

Not getting paid for all time worked

What are California minimum wage laws?

Misclassification / Independent Contractors: Am I owed wages if I was misclassified as an independent contractor?

What is time shaving?

What's in it for me when I bring a wage class action lawsuit or a PAGA lawsuit in California?

First, the satisfaction of knowing that  you are taking on the company. There is a lot to be said for standing up to the company.

Second, there is a lot to be said for getting even when someone screws you over (make no mistake about it - not paying you the wages you are owed under California law is screwing workers over).

Third, not taking it anymore.

Fourth, getting your hard earned wages back!!!

Call us at 619-304-1000  - If you call after regular business hours, when you leave a message, be sure to repeat your name and telephone number twice, so we get it correctly. And be sure to indicate whether it's okay if we respond by text.
Text us at 858-281-8008 - Be sure and put "new wage case" in your text.
Or leave us a message on this webpage.

The underfunding of the California Labor Commissioner's office

At a California legislature hearing, California Labor Commissioner Julie Su was testifying before I was called to testify. Labor Commissioner Su talked about the chronic underfunding of the Labor Commissioner’s office. They are swamped with wage claims. It is disheartening to hear how many claims each Labor Commissioner investigator is expected to prosecute.
Because of the Labor Commissioner’s severe underfunding, it can be difficult for folks to win small wage theft claims.  It really is difficult for the State of California to effectively represent folks with small wage claims under these trying circumstances.  In these instances, it usually makes a lot of sense for all the workers to band together with a class action case.
What you are going to see is the company can afford a top notch lawyer to fight wage claims.  The only way you are usually able to get a lawyer that can go toe-to-toe and beat the well funded company lawyer is to hire a really good, honest wage and hour class action lawyer.

You can be a modern-day David

If you wondering if you can take on and beat the company, I am here to tell you that, yes, you can  be David. You can beat Goliath. You will be that when you David, you first have to prepare. Then you will see that it was Goliath all along that should have been the underdog.

David had his sling-shot - you have California's powerful wage laws

You have California’s powerful wage theft laws. You can take on Goliath and win.
This would be another good time that all of our huge past successes in beating the company Goliath’s don’t guarantee success in your case or any other case. As I always point out, the company will drum up dozens of defenses to your class action case and/or PAGA case. They are going to hire really talented and skilled lawyers. And you never know what Judge you are going to draw (yes, this can make a huge difference).
Every case is different and I can’t possibly tell you about the chances in your case until I see the evidence.

It all starts with one

But, know this. It all starts with one person. One person that is willing to take on the company Goliath. Yes, you can be David. Because you work in California, you are armed with the most powerful wage theft laws in America.
I know this because I am one of the people that is helping to make California’s wage theft laws. Testifying before the California Assembly, testifying before the California Senate, sitting elbow to elbow with some of the most powerful folks in Sacramento, taking cases to the California Supreme Court - writing winning briefs to hel California workers like you.
Yes, I know first hand the sling-shot that you can use to beat the company Goliath. You can be that person that successfully stands up to the company that is stealing your wages. 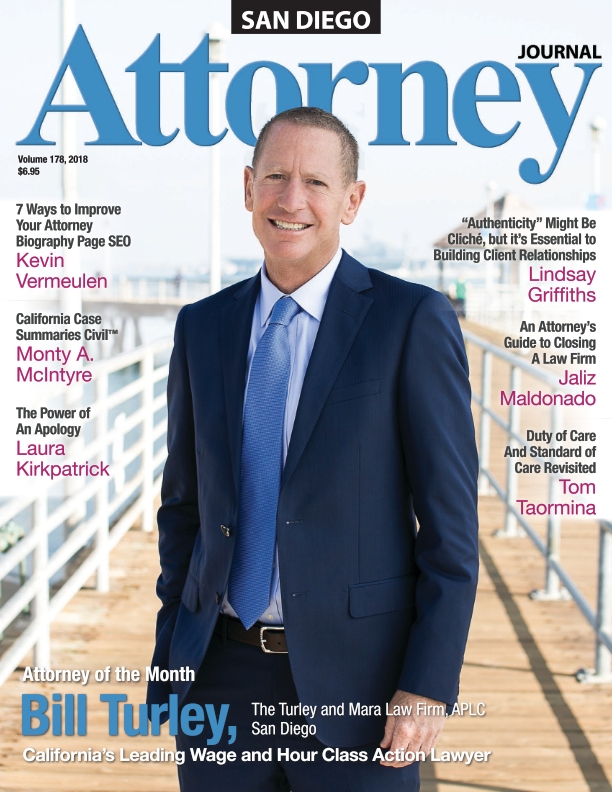 Call us at 619-304-1000  - If you call after regular business hours, when you leave a message, be sure to repeat your name and telephone number twice, so we get it correctly. And be sure to indicate whether it's okay if we respond by text.
Text us at 858-281-8008 - Be sure and put "new wage case" in your text.
Or leave us a message on this webpage.

These discussions and/or examples are not legal advice. All legal situations are different. These testimonials, endorsements, photos and/or discussions do not constitute a guarantee, warranty, or prediction regarding the outcome of your legal matter, or your particular case/ situation. Every case is different. There are any number of reasons why class actions are not certified, not won and/or PAGA actions are not successful.
Just because we have gotten great results in so many other unpaid wage cases, doesn't guarantee in particular result in other cases. Including, your wage case. Every case is different.