What is a Statute of Limitations?

However, most wage claims can be extended to four years through UCL actions (read: 17200 claims). These are unfair competition claims.  Thus, I usually think of wage claims as having a 4 year statute of limitation period.

PAGA (Private Attorney General Act) claims have a one year statute of limitations.

In this article I cover how you may be owed a lot or MONEY in unpaid wages and/or penalties under California Labor Code, California Wage Orders and/or California's PAGA laws.

What Does All Of This Mean?

What Does All Of This Mean?

1. If you suspect that you aren’t getting paid properly or that your employer or ex-employer is ripping off your wages, you should contact a seasoned California wage and hour lawyer as soon as possible. They will know California wage law statute of limitations.

2. Under most circumstances, you can bring a claim against an ex-employer long after you stopped working there.  However, every day that you wait to bring your California wages claim, you are probably losing a day of wages.

3. An hour or two a day or a 30 minute lunch that is automatically deducted each day or missed meal and rest periods, all adds up pretty fast. Then when you throw in interest and waiting time penalties the money owed to you can really add up quickly.  Before you know it you are talking real money.

4. Most folks, included employers, have no idea what a wage violation is under California law. If you are the employee, you need to speak to a seasoned California wage and hour lawyer. If you are an employer you might have heard the expression: “Ignorance is no excuse under the law.”  That is certainly the case with most California wage laws. 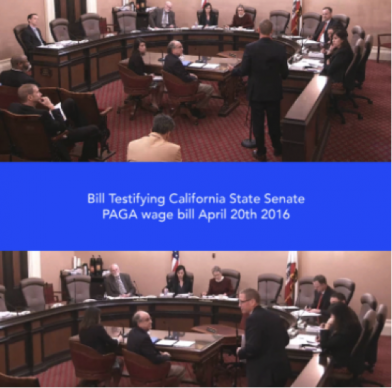 Bill helped draft recent changes to the PAGA laws. Bill was the wage and hour lawyer that sat met with the Governor’s office to help write the new PAGA amendments.